This part of the documentation describes various ways of customizing Nussknacker - from adding own Components to adding listeners for various Designer actions. The main way of adding customizations to Nussknacker is ServiceLoader

Types of expressions are based on Java types. Nussknacker provides own abstraction of type, which can contain more information about given type than pure Java class - e.g. object type (like in Typescript) is represented in runtime as Java Map, but during compilation we know the structure of this map. We also handle union types (again, similar to Typescript) and we have Unknown type which is represented as Java Object in runtime, but behaves a bit like Typescript any (please note that Unknown should be avoided as default Security settings settings prohibit omitting typechecking with Unknown.

TypingResult is the main class (sealed trait) that represents type of expression in Nussknacker. Typed object has many methods for constructing TypingResult

Components are main method of customizing Nussknacker. Components are created by configured ComponentProvider instances. There are following types of components:

The Designer uses DeploymentManager interface to perform actions on scenarios (deploy / cancel / etc.). All providers that are available in distribution deployment are located in managers directory and are added to the designer classpath. If you want to implement own DeploymentManager, you should implement this interface, package it, add to classpath and configure scenario type to use it. More info you can find on DeploymentManagerConfiguration page

Other SPIs for Nussknacker customization (documentation will follow soon...)​

The diagram below shows dependencies between modules. You can see two main groups on it :

API modules contains interfaces that are needed by our core modules (on both designer and runtime side).

On the other hand Utils modules contain classes built on top of API which can be used in extensions but are not mandatory. API of Utils modules can be changed more often than API inside API modules

Both API modules and Utils modules have several modules with -components part in name. They should be used to build own Components

nussknacker-scenario-api contains classes needed to operate on scenarios: creating it via DSL, marshalling to JSON, etc.

nussknacker-deployment-manager-api contains interfaces needed to create own DeploymentManager that can be used to scenario execution. 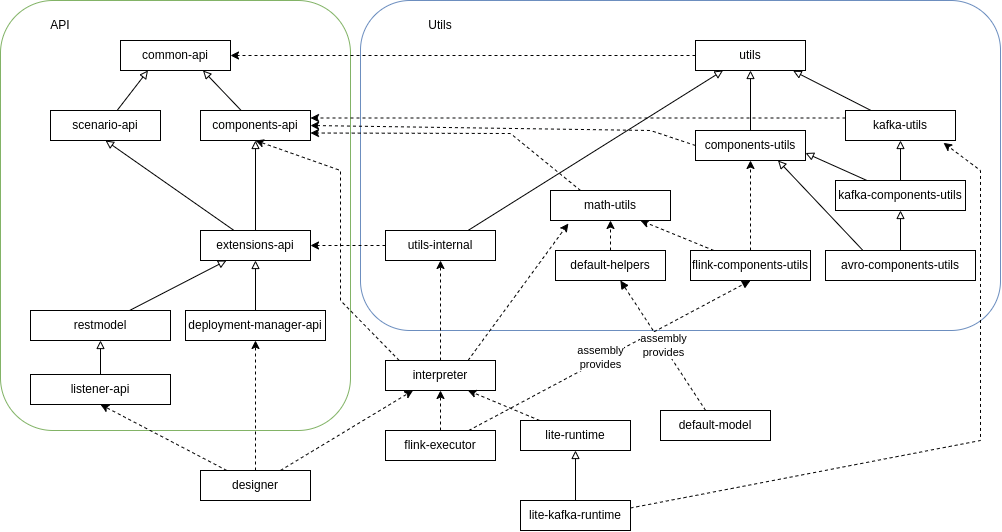 If you find you need to depend on those modules, please bear in mind that they contain implementation details and their API should not be considered stable.

The plug-in jar should be fatjar containing all libraries necessary for running your customization, except for dependencies provided by execution engine. In particular, for custom component implementation, following dependencies should be marked as provided and not be part of customization jar: